Why Are They Important in Cooking Oils?

Oils are generally susceptible to rancidity (oxidation) and quality deterioration during storage, resulting in an unpleasant taste, odour and compromised nutritional value. The presence of antioxidants is one of the most efficient ways to prevent rancidity or oxidation of cooking oils and thus, extend their shelf life.

Unrefined or cold pressed oils retain the natural antioxidants that are otherwise damaged by exposure to heat or chemical solvents during the refining process. Most cold pressed oils are rich in vitamin E (α-tocopherol), a powerful biological antioxidant. Primarily, vitamin E protects unsaturated fatty acids which present in vegetable oils, from oxidation during storage and so prolongs the shelf life of the oils. Dietary source of vitamin E also benefits the body:

When cooking oils are exposed to high temperatures during cooking, they can be damaged. This is especially true for oils that are high in polyunsaturated fats including most unrefined oils. When heated, the unsaturated fats in the oils are oxidised and generate harmful compounds such as lipid peroxides and aldehydes, which can contribute to cancer development. In addition, these oils also release some carcinogenic compounds during cooking, which could  contribute to lung cancer when inhaled over the long term. Simply being in a kitchen as these oils are used can actually cause harm. Minimise exposure to harmful and carcinogenic compounds during cooking by using oils that can withstand high smoke points and are high in antioxidant, particularly vitamin E.

Camelina Oil scores well in both criteria. It is one of the cold pressed oils with high amount of vitamin E (Chart 1), yet, it also has high smoke point (245°C), making it one of the must-have cooking oils in every kitchen for health’s sake. 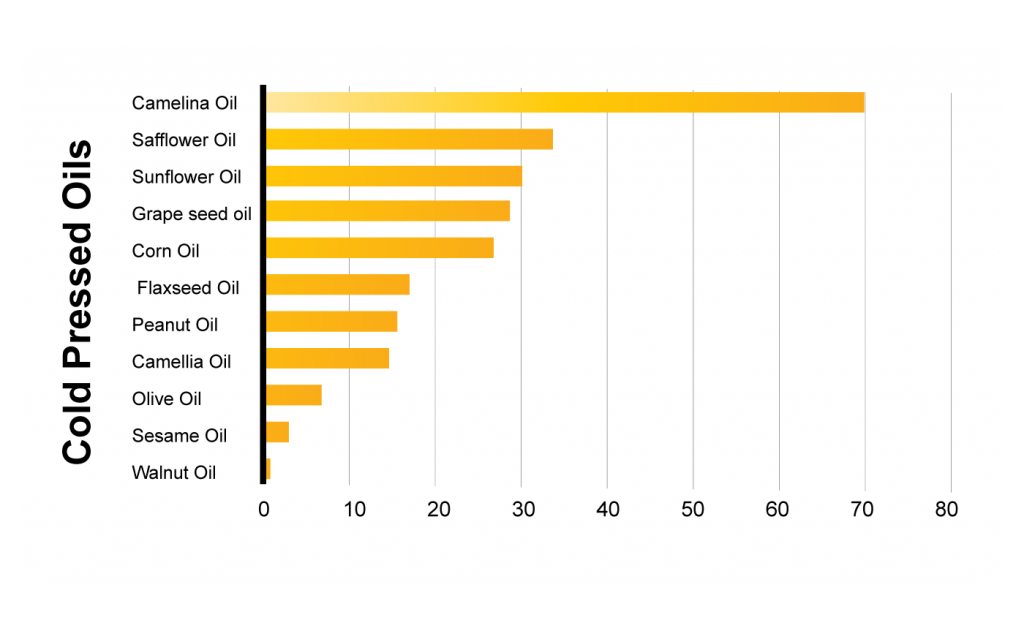 Although refining processes are effective in removing the majority of unwanted components from crude vegetable oils and achieve the desired colour and mild taste, most of the natural antioxidants such as α-tocopherol (vitamin E) are also lost during the process, making refined oils more susceptible to oxidation. Oxidised lipids and toxic chemicals may exist in the oil products during the refining process, hence, could affect the quality of the oils.

To improve the oxidative stability of refined oils, synthetic antioxidants, such as BHA (butylated hydroxyanisole) and BHT (butylated hydroxytoluene) are commonly added to prevent the oils from oixidising and have a longer shelf life. There is ongoing controversy, however, about the safety of BHA and BHT. Based on animal studies, the National Toxicology Program concluded that BHA “is reasonably anticipated to be a human carcinogen,”.  BHT is not a listed carcinogen, but some data have shown that it does cause cancer to develop in animals. Since no one really knows how BHA and BHT act in the human body, it is best to avoid the products with BHA and BHT. Compared to natural vitamin E, edible oil manufacturers generally prefer BHA and BHT as they remain stable at higher temperatures. On the other hand, cold pressed oils rely on vitamin E as a natural preservative, this should be given a higher priority compared to refined oils.

For the health of everyone in the family, it is highly recommended to select cold pressed oils with high antioxidant (e.g. vitamin E) and high smoke point such as Camelina Oil in your daily cooking. Although, vitamin E is relatively resistant to heat and insoluble in water, high-heat cooking for extended periods of time, for example, roasting may cause loss of vitamin E. To help reduce heat degradation on vitamins, short cooking methods, such as stir-frying and blanching are the better options.